When Zaki listed Paris as one of this year summer’s trip destinations, I was bit reluctant. Not because I don’t like Paris, (of course I like it! Visiting Shakespeare and Co had been in my bucket list since the first time I watched Before Sunset in fact) but I was worried because what Paris is known for: smelly metro, pickpocket, scammers, pricey stuffs and racism (especially after several terror attacks that happened in Europe lately 😥 ).

But he convinced me that we got to visit Paris anyway. Sooner or later. One day or another. It’s Paris after all. One of the most visited cities in the world. Rich of history, art and culture. The place where many important thinkers (and their important thoughts) were born. So, how can I say no?

Paris then became our destination after Venice. And because we had quite a drama (read more about it here) in Venice, we decided to slow things down a little bit in Paris. Besides, after spending time (and money!) in Milan and Venice, we needed to rearrange our budget as everything in Paris is not that cheap (the confession of budget travelers 😀 ).We arrived at Paris Charles de Gaulle Airport at noon and took the metro to our hotel. Traveling in Paris is indeed easier by metro. It connects every corner of Paris. You don’t have to stay in the inner city (which is of course very expensive) to be able to explore Paris. You only need to stay near any metro station and it will guarantee an easy travel. Just make sure you familiarize yourself with its system and routes to make your travel free of hassle (like for example, to avoid choosing the wrong direction). I personally recommend to purchase the Paris Visite travel pass if you plan to travel often and want to skip the queue when buying tickets. It can be purchased online, in the airport and at the automatic vending machines. However, if you won’t take public transport often, a single purchase ticket is much cheaper (1.90 euro, one way). 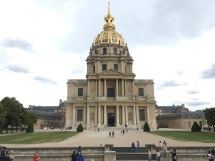 at the Arc de Triomphe

Anyway, as I already expected, the metro was dirty and smelly. Beggars were also everywhere. But, to my surprise, I met lots of kind people during my stay in Paris. There was a young man who offered me help in a metro station when I was struggling with my luggage. There was a nice kebab seller who gave us extra bread as bonus. There was a lady who helped me ordering food because I don’t speak French. And there was a handsome gentleman (ahem!) who helped me in the bookstore and we had nice conversation about feminism and women in the third world countries (so typical 😀 ). So, I guess I was just being too worried about Paris. I mean, it’s touristy, super crowded and (again) smelly! But, it’s not that bad. There are more things to love about Paris. Its embedded spirit of freedom and liberté. Its stunning history, culture and art which are reflected in its daily life. Its mouth watering’s foods and beverages. And plenty more. I thought it was enough to visit Paris just once. But I was wrong. I ended up falling in love with this city and want to see it again next time (and by next time I mean soon! haha).

When we had just arrived in Paris, we didn’t go out anywhere except to a food stall near the hotel and to Carrefour, haha!. We decided to rest our tired legs and backs by staying at the hotel. Shame on us, we woke up late on the next day so we only had half day to explore. To make it even worse, it was cloudy and rainy almost all day long so we barely able to walk around. Our first destination that day was the Arc de Triomphe. We went there by metro and planned to travel around with our Paris Visite card, but because it was (then) raining, we decided to take the mainstream hop on hop off bus from there (so we didn’t need to walk under the rain) and followed their schedule and route. We stayed in the bus all way long and only got off when it was not raining. Haha. As a result, we passed the same places more than one time since we didn’t get off from the bus even when it has already made a full circle (thank God the bus driver didn’t complain 😀 ). We’re bit lucky though as the rain stopped several times and we were able to take pictures in Eiffel Tower, Trocadero, and surrounds. At least, by taking picture in front of Eiffel, our visit to Paris is official! :D.

Prior to our trip to Paris, my biggest question was: where to stay. I know that Paris is divided into several arrondissement (arr). And each arr has different character (and price 😄 ). The closer to the tourist attraction, the more expensive it is. However, the arr is not circular but scattered. You can see the details on the picture below:

After doing some comparisons and considerations, we chose the 17th arr. We stayed in a chain hotel close to Porte de Clichy station. And I was happy with our choice. I think the area is just great, especially for Muslim traveler. It’s easy to find halal food and you don’t need to worry about racism as some of the residents (I won’t say mostly because I don’t have the exact number, but i’s certainly a lot of them) are immigrants from Africa and Middle East. Well, at least, I didn’t experience any bad thing during my stay. In fact, I felt really welcome there. Some of them even think that I was a local and started to talk to me in French (my face is definitely so random. After Malaysian, Persian, Afghan, Moroccan, and Filipinos, now a Parisian? Seriously? Do I look like Marion Cotillard? Haha, I wish! 😀 ). Only sellers and waitress in tourist spots who can recognize me as Indonesian. They even tried to sell souvenirs to me in Indonesian. “Dibeli dibeli, Bu. Murah Bu (Buy this item, Madam. It’s cheap, Madam).” I bet there must be lots of Indonesian tourists in Paris. 😀

We spent the following day by going to Louvre Museum (which I first noticed from Dan Brown’s novel: The Da Vinci Code. I know. Where have I been? 😀 ), Seine River, The Pont des Arts where people prove their love by padlock, the Shakespeare and Company (Co) and Sorbonne University. Visiting local university and/or library is an inevitable part of our travel itinerary. I don’t know why but we keep doing that since the first time we travel together as a family. Maybe we’re just nerdy bookworms. Or maybe, it’s just the perk of being scholars. Haha. The day was really well spent despite the drizzle. We even had a chance to see the majestic Notre Dame, which is nearly located from the Shakespeare and Co. 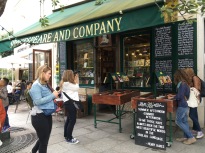 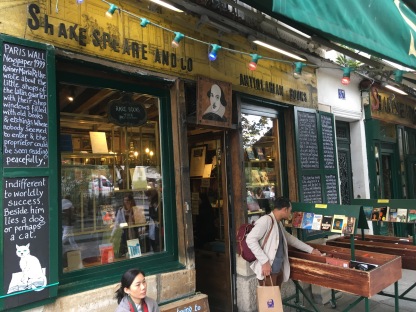 Then, it came the day when we had to leave Paris (sigh!). We decided to enjoy the last day in Paris by having a Parisian way of breakfast (croissant? checked! éclair? checked! espresso? checked), washing our laundry in the Laverie (communal laundry), and visiting Grande Mosquée de Paris. 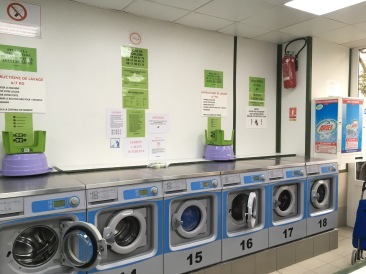 The Laverie or communal laundry 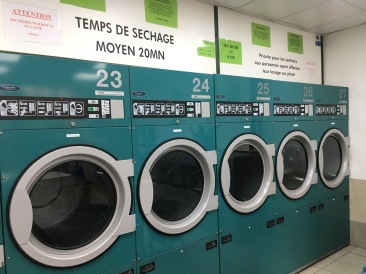 Our three nights stay in Paris felt like a glance. And for some reasons, we realised we had not explore as much as we supposed to. But hey, let’s leave some for next visit! Because where there are lots to like, there’s always a reason to come back. Au revoir (not adieu) Paris! 🙂