Our trip to Venice was really something. Not just because the city itself is so pretty at every corner, but also because we had lots of unforgettable experiences there. Both the happy and the upsetting ones :D. 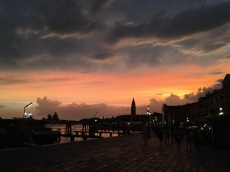 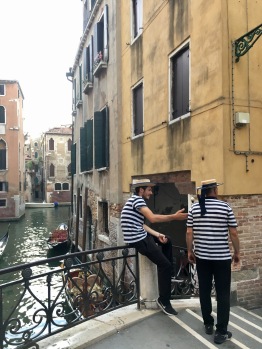 The view you cannot not falling in love

We went to Venice by Trenitalia from Milan. The train departed from Milano Centrale and took less than three hours to get to Venezia St Lucia station. It was a pleasant journey though there was no wifi on board (deal with it millennial generation! 😀 ). When we arrived in Venezia St Lucia, we could feel the touristy ambience in an instant. It’s not really surprising as a report says, “More than 60,000 people descend on Venice each day,” (The Guardian). Not many Venetians live in Venice now. Even an article in the Forbes claims that the city is “underpopulated and overtouristed” since it has 54,500 resident only, but receives 30 million visitors a year. Reading these articles makes me feel guilty as a tourist. That’s why I always try my best to behave well and live like a local wherever I travel. Being a tourist is not an unlimited pass to do whatever you want just because you have paid. A tourist is a guest. And as a guest, we must respect the host. Just like that famous quote: “Take nothing but pictures, leave nothing but footprints, kill nothing but time.”

Strolling around the city

On our way to Venice

Believing that getting lost is the best way to explore 😀

Anyway, we arrived in Venice at around 3 pm and we couldn’t wait to stroll around the city so we did a rush check-in at the Hotel Ariel Silva and went to explore straightaway. The hotel is perfectly located at the heart of Venice. It’s close to many tourist attractions and everywhere feels like walking distance. Venice itself is like a giant maze. It’s easy to get lost but as I always believe, getting lost is the best way to explore a new area. Haha. So we didn’t really plan the route and just stroll around wherever we want to. Then, my husband said, he wanted to visit the Venice Biennale 2017 so we checked the map and went there. The location for Venice Biennale 2017 is not in the city centre so we need to take the water bus to get there. But we bought the wrong ticket (the information in the machine is bit confusing) and there was none to ask about it so we decided to walk. Too bad, the exhibition was already closed when we arrived. It was indeed a long walk with numerous stops due to the rain so we couldn’t make it on time. I feel sorry for my husband and it was bit a shame as Venice Biennale is one of the most prestigious biennale in the world. But at least, we bumped into tons of beautiful things and buildings along the way such as Piazza San Marco, the famous Gondola, Saint Mark’s Basilica, Doge’s Palace, and so on.

Another corner of Venice

One of the most recommended activities in Venice: gondola ride 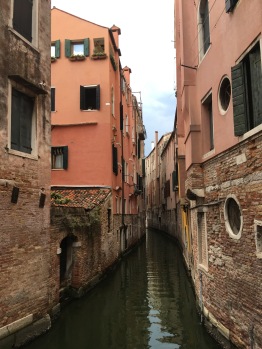 Then, we walked back to the hotel, and stopped by in a nice restaurant that sold local cuisine. We ordered spaghetti with frutti di mare or seafood (in Italian) for dinner, and it was a yummy one. Venice is indeed famous for it’s seafood cuisine. People say, you’re not really in Venice until you’ve tried one of the seafood dishes. So, I thought it was a good choice and a perfect way to wrap the day. 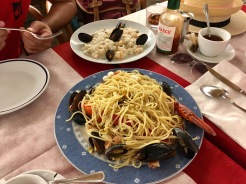 Before the drama began

But, that was also when the drama began …

Soon after we finished our dinner, we went back to the hotel and everything was nice. We felt happy and full, and went to bed with a good feeling. But then, at 1 pm, when I was still having a before-bed-chitchat with my husband, I heard my daughter coughing. It was just a regular cough and didn’t sound suspicious at first so I ignored it. But then she woke up and started to vomit. She didn’t stop vomiting until more than ten times. I gave her more fluid to keep her hydrated but she vomited every time she drank. I started to worry. It has something to do with the seafood, I thought. Well, as far as I know, seafood is bit tricky. If it’s not fresh, it could cause a stomach flu or allergy reaction. So I asked advices from my friend, who is a doctor in Indonesia, and he said that I needed a medicine to stop my daughter from vomiting so she wouldn’t lose too much fluids. I then talked to the hotel’s staff to find the nearest pharmacy, but he said that there is no 24 hours pharmacy in Venice and that the closest one opens at 9 am. Oh no.

I became more worried and tried to figure out other solutions. I googled the health services in Venice but most of the nearby ones only open until 9 pm. But, there’s a hospital with emergency service which is located not so far from the hotel, so I asked the hotel’s staff to help me calling the ambulance if things went worse. Meanwhile, I kept treating my kid using the first aid procedure for vomiting: giving small amounts of fluid frequently. But she seemed really unwell and weak. Then, she started to have a diarrhea, and so was I.”It’s positive,” I thought. Must be the seafood. I ate the same food with her and I had similar symptoms. I couldn’t wait any longer. I asked the hotel’s staff to call the emergency unit.

In 20 minutes they arrived, and none of them speak English. Oh well. 😀

I tried to explain the situation and my kid’s condition to the nurse in English with some limited Italian vocabularies (thanks to Google translate! 😀 ) then we went to the hospital by water ambulance. The nurse observed my kid’s condition and kept telling her that things are gonna be alright (very kind of her). We arrived at the hospital and rushed to the emergency room. After few minutes of administration procedure, my kid was taken to the kid’s section to get a full observation from the doctor. And luckily, the doctor speaks English. He asked some questions, checked here and there, made a joke that make my daughter laughed, and he finally diagnosed that the symptoms were caused by a mild virus. It can be from the seafood. It can be from something else. As we know, we can easily catch a virus when our immune system isn’t good enough to confront it. The more important thing is that the infection is mild and it didn’t require any medicine. He even said: “If we gave her medicine at this stage, the effect of the medicine could be more dangerous than the virus itself”. Wow. What a rational use of medicine! Bravissimo, doc! 🙂

However, we needed to stay in the hospital for couple of hours. To make sure that there were no other developed symptoms. The doctor gave fluid to my kid and asked us to observe if she could hold it for more than one hour. So we stayed in the hospital lounge and waited.

Thank God, my daughter could hold the fluid. She wasn’t vomiting or having diarrhea anymore so we didn’t need to stay in the hospital any longer. “Get some sleep,” said the doctor before we left. We surely looked sleepless that morning, haha. We felt so tired indeed but we went back to the hotel with so much reliefs. Nothing beat the happiness of finding out that your significant other is alright. Especially when you’re in the middle of a long journey.

We spent the next day by sleeping and making sure that our daughter was fully recovered from the illness. Then, we took a short stroll to enjoy Venice once more before we left for Paris in the following morning.

One last stroll before leaving Venice

Phew! It was quite an experience for me and my family. We’re so grateful that everything is back to normal now. As Venice is just the second phase of this trip, we really hope that the rest of our journey will be as smooth as smoothie. Always happy. Always healthy. Till next time, Venice. Grazie per la sua gentilezza 🙂