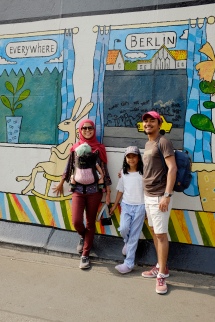 Germany had always been in our travel list since the first day we arrived in Europe. But we were bit on and off about the right time to visit the country. Mainly because we wanted to visit some cities in a row. Haha! What a plan indeed!

We wished we could travel to all the cities in Germany where our friends live. Like for example: 2 days in Hamburg, 3 nights in Berlin, couple of days in Frankfurt, stopping by in Cologne, Nuremberg, and so on.

But that ambitious plan isn’t so budget friendly of course 😆 So we ended up just going to Berlin last July.

Geographically speaking, Hamburg is much closer from Lund and we do have friends who live in Hamburg so we could have started from there. But, there’s no direct flight to Hamburg and we wanted to try a short and easy first flight for Baby K. So Berlin is a perfect choice as it’s just 40 minutes flight from Copenhagen. Besides, it’s BERLIN. The capital of Germany. Famous throughout history. Do we really need a reason to visit it? I don’t think so 😄

The moment when we landed at Tegel International Airport, we were bit surprised by the fact that the airport is not as sophisticated as we assumed. But when we arrived at Berlin Central Station, we were awed! The train station is huge, lively, functional yet still eye catching. And honestly, I think the train stations in Berlin are much prettier than the airport, especially the main ones.

Mbak Virtri , our friend who is a Berliner now 😊, picked us up at the station and took us to her place by train. We had bought the Berlin Card at the airport so it was easy to travel by bus, train, or metro. And soon we found ourselves falling in love with Berlin. It does not have this particular old city aura like Stockholm or Copenhagen, but it has its own charm. It’s like, you cannot NOT enjoying life in Berlin 😂 And that’s what we did precisely. We embraced the city spirit and decided to live a life as fullest as possible!

It was Sunday when we arrived and Zaki was already planning to go to Mauerpark since forever, so we went there soon after we unpacked our stuffs in our friend’s place. We went to Mauerpark by tram and just like in Paris, people mistaken me as a local. Once we got off from the tram, a group of tourists approached me and asked: “Excuse me, do you know where Mauerpark is?” 😅

To which I answered: “Eh? I’m actually looking for the park too.”

Then they left, while probably wondering about my immigrant look 😂. I’m sure they found the park though as it turned out to be really close from the tram stop. We strolled around the park and it was packed with people. It’s touristy (of course!) but still lovely to visit. The price is bit high for second hand stuffs but you can just look around, drink sugar cane juice and enjoy the performances, like we did. 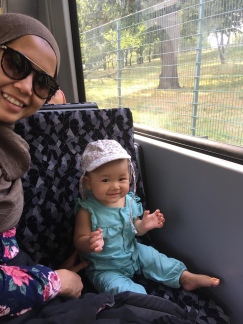 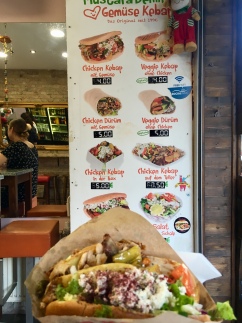 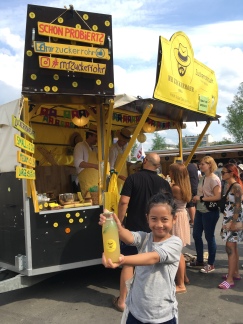 Before we went back to our friend’s place, we bought the famous Mustafa Demir döner for dinner. And It was really yum! My mouth is drooling just to think about it now 😋 No wonder some say it’s a meal to remember!

On our second day, we went to the East Side Gallery. It’s a gallery of murals painted directly on what used to be Berlin Wall. This is one of the most famous spots in Berlin as it depicts the history of the city as well as the hope and projection for the future. We took some pictures there, walked by the Spree River  then enjoyed the beauty of Oberbaumbrücke, a double-deck bridge that links Friedrichshain and Kreuzberg, and therefore has become an important symbol of Berlin’s unity. 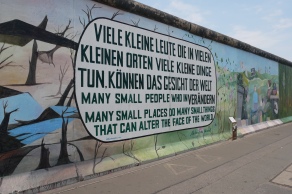 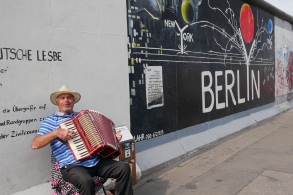 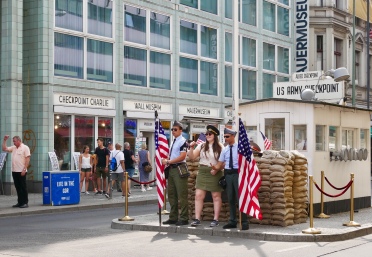 We then went to Checkpoint Charlie, a crossing point between East Berlin and West Berlin during the Cold War (1947–1991) which is now turned into tourist attraction. Here you can meet “the guards” of the border and take a picture with them if you want. Do not look for Charlie though as the name Charlie doesn’t refer to the guard but the letter C in the NATO phonetic alphabet. 😀 You can also have your passport stamped with unofficial stamp. But if you really wanna do it, make sure you use old passport or souvenir passport because it is again unofficial so it might affects the validity of your passport.

Checkpoint Charlie is located quite close from other tourist spots, so after having lunch at Mall of Berlin, we then walked to Memorial to the Murdered Jews of Europe or the Holocaust Memorial. 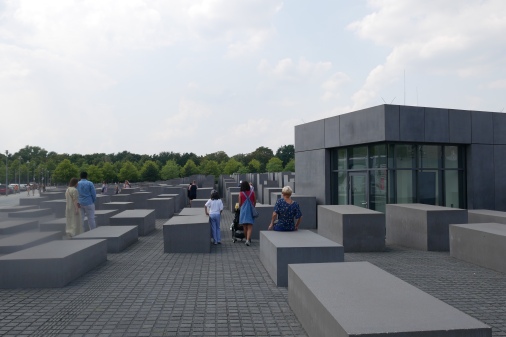 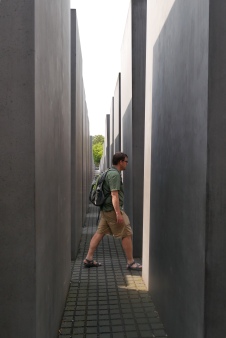 After that, we went to another famous landmark in Berlin which is just a stroll away from the Holocaust Memorial: Brandenburger Tor, and by doing so, our visit to Berlin was official. Haha!

We woke up and got prepared like usual. Then suddenly, Zaki, Hayya, Mbak Virtri and Mas Firman came out from the kitchen, brought some cakes and sang “Happy Birthday” to me. That day was indeed my birthday. I didn’t expect a surprise as Zaki wasn’t really into birthday celebration 😅 so they definitely got me. 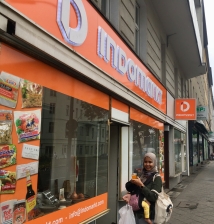 Then Zaki and I (and baby K of course) went to an area called Wedding, not to attend a wedding 😁 but to go to Indonesian specialty shop named Indomarkt. The place is bit far from where we stayed but it worths all the journey as we got bakso, Indonesian tea, kencur, and plenty more there. The owner even gave me homemade Tahu Brontak, a special fried Indonesian tofu. Then when we’re back, Mbak Virtri made us Mie Ayam Bakso for lunch. Oh, what a birthday treat! I was (and still am) so thankful 🙏🏼

After lunch, we went to Berlin Tower, Museum Island, had a quick fika in Alexanderplatz, then spent the rest of the day enjoying sunset by the Spree River. 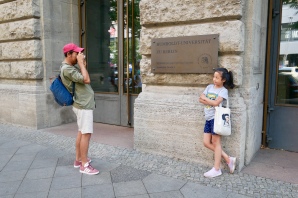 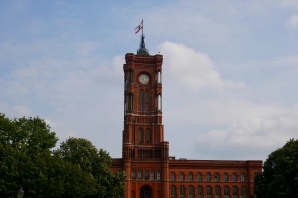 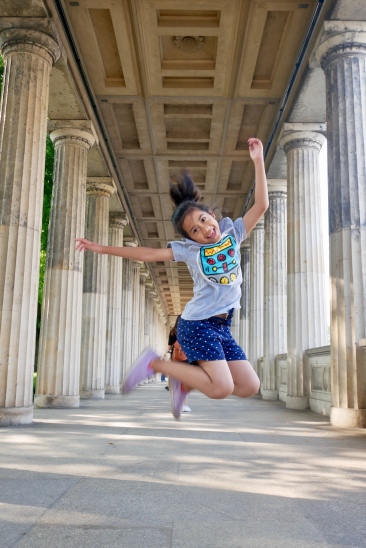 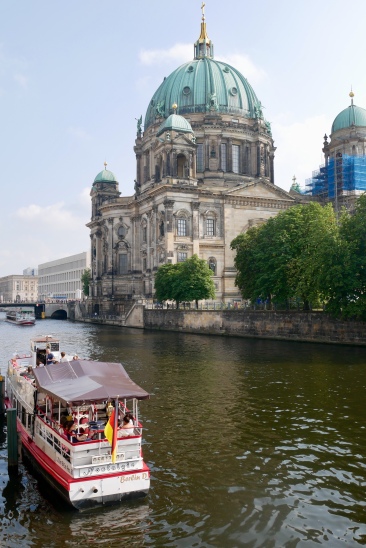 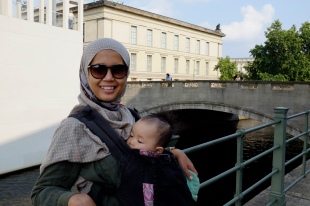 We didn’t explore much as we had a morning flight, so we just had breakfast, waved goodbye to Mbak Virtri, Mas Firman and Kelana (we can’t thank them enough for having us in Berlin!)  then went to the airport. 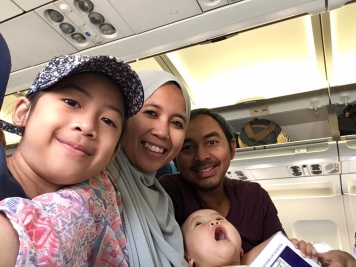 Oh, I almost forgot, we managed to do a quick shopping at Ampelmann shop in Berlin Central Station. Ampelmännchen or Ampelmann is the symbol shown on pedestrian signals. It’s cute and and has a long history behind it, so I loved to take some home for souvenirs 😁

We arrived in Lund in the afternoon and the city is quite a contrast compare to Berlin. It was still summer break so the students had not come back to Lund making the city even more tranquil, we secretly screamed: “Take us back to Berlin!” Haha.

Anyway, we watched a movie called Berlin, I Love You the other day and I can’t agree more to one of the quotes in it that says:

“Berlin is a city of rebirth”

Indeed, this city had been through a lot. It rose and fell for so many times. Yet, it comes stronger every time. It’s always find a way to rebirth, like a phoenix that dies in flames and obtains new life by arising from the ashes.

Our trip to Berlin was not just about smiles and rainbows. Well, traveling with kids (especially a baby) is not always light and easy. The daddy wanted this. The big sissy wanted that. The baby just wanted mommy all the time so the mommy didn’t even know what to want 😂 .

But I’m happy to have a chance to “celebrate” my birthday in Berlin. I’m happy that I was exposed by the city’s vibrant and history. Though it was just a short visit, the city has taught me a lot. Thank you Berlin. We’ll be back before you know it! Tschüss für heute! 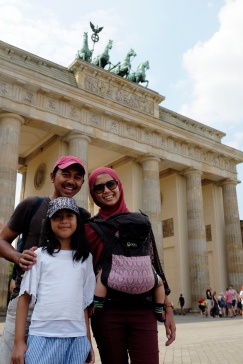 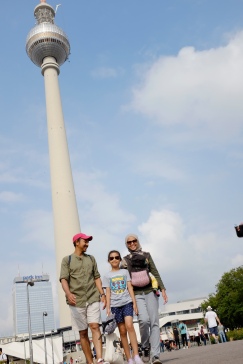 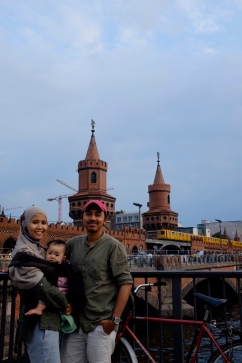