Journey to the Southernmost and South-easternmost of Sweden

As a new resident in Skåne (also known as Scania in English), I received a complimentary JOJO card valid for two weeks to travel around the region for free with Skånetrafiken. This promo applies to every person who has just moved to Skåne and is registered in Skatteverket, the Swedish Tax Agency. Skånetrafiken itself is the public transport provider in Skåne that runs services throughout the province. With Skånetrafiken, we can travel with single tickets, Skånetrafiken app and JOJO card. The complementary JOJO card is worth around 650sek (equal to approximately $75), so it really is a good deal. I didn’t want to waste this opportunity for sure. I’ve been to some municipalities in Skåne like Lund (of course! 😆 ), Malmö, Lomma, Landskrona, and Helsingborg, but there are still lots more to explore. Too bad, the card arrived in early May when I was preparing (then having) a trip to Stockholm (Stockholm is outside the Skåne area by the way so I couldn’t use the card there). Thus, I missed my first week of the complimentary period and only had few days left to travel around the region (sigh!). However, thanks to Zaki Habibi (who insisted me to have a weekend getaway), I was at least able to visit these three counties in Southernmost and South-easternmost of Sweden:

The name of this town has been captivating me since the first time I read it on the train information board. For some reasons, I found Simrishamn catchy and interesting because it doesn’t sound like other typical Swedish towns such as Helsingborg or Gothenburg. Turns out, it really is interesting. Located in the area called Österlen, Simrishamn is a lovely town with a rich fishing past. No wonder the coat of arms for the town is fish and boat. The typical street view of Simrishamn consists of houses, restaurants and tiny shops in beautiful colors. There’s no better way to enjoy afternoon in Simrishamn than having fish (like a yummy grilled mackerel or crunchy fish&chips) for lunch by the harbor then walking through its beautiful alleys.

Far before I moved to Sweden, Zaki and I used to watch the Kurt Wallander series on television. Later we know that Ystad is the setting of that popular crime series by Henning Mankell. But, this town is nothing like a murder scene (even though the town’s slogan is “perfect town for a murder” 😄 ). It is, on the contrary, a beautiful town with medieval, pastel colored half-timbered houses on cobblestone streets and sun dappled squares. I spent few hours in Ystad by strolling around the city lanes, had fika in a coffee shop then watched the classic car parade. What an enjoyable way to spend the day. 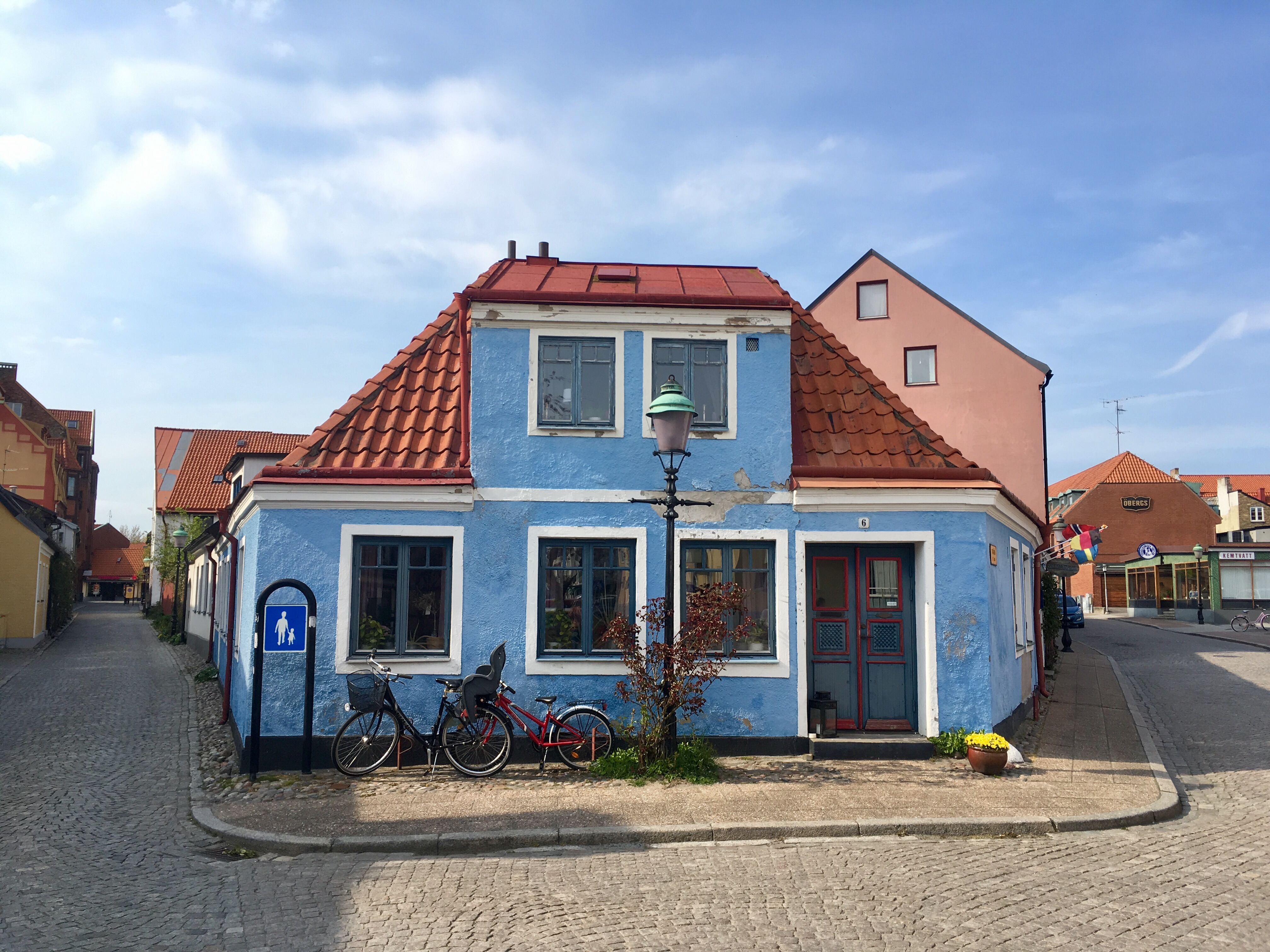 This corner of Skåne is known for its agricultural fields where crops like golden wheat, green potato foliage and bright yellow Rapsolja (better known as Canola) make up a beautiful patchwork blanket. Indeed, the soils in this area have been recognized to be among the most fertile croplands in the world (source). The trip to Trelleborg itself, especially by train, is so enchanting. During spring for instance you will have beautiful landscapes full with Rapsolja as your both sides views. Super lovely. But Trelleborg is more than just scenic views of the fields. The city center also offers lots of things to do and places to visit like Viking museum or Trelleborg Old Water Tower.

I know I haven’t made the most of my visits in Simrishamn, Ystad and Trellebord (I didn’t even visit the Viking museum 😪 ). But I promise my self to come back again (maybe on summer 😎 ), because as the tagline in Visit Skåne website says: “Once you’ve visited Skåne, you’ll want to come back. Again and again.” I just can’t agree more! 🙂