Those people were heading to the opening of the Perth Royal Show 2011, an annual event held by the Royal Agriculture Society (RAS) of Western Australia. This show was held at Claremont Showground, 10 minutes drive from the city, that can be easily reached by Fremantle line trains as well. No wonder this line was very crowded during the show.

The Perth Royal Show is an event which quite similar to pasarrakyat or loosely called as pasar malam in Indonesia. It is like a combination of Sekatenin Yogyakarta and DuniaFantasi(Dufan) in Jakarta, since it offers cultural history and education, shows and exhibitions, as well as family fun and adrenaline sideshows.

The Perth Royal Show has been held for more than 100 years as the first show was held on 1902.Claimed as an icon and an asset to the community, the Perth Royal Show is founded by the RAS, which was established in 1831. The RAS is a non-profit organization, which works to promote agriculture in Western Australia.

“Research carried out by The Royal Agricultural Society of WA found that the event is the ideal vehicle to engage with the WA public. 86% of Western Australians perceive the Show as doing an excellent job showcasing the best animals and produce in WA,” said Hugh Harding, the President of the RAS of Western Australia in his message.

Indeed, the very first Perth Royal Show was aims to showcase Western Australia’s agriculture. The RAS believed that it is important for young people to gain a better understanding of agricultural products and where they come from. This show has been used as a display for animal breeding and sports.

Nowadays, the modern Perth Royal Show is including both agricultural events and commercial fairground. Events for this year were categorized into the art and exhibitions events, the animal lovers events, the thrill seekers events, the food lovers’ events and the family fun events.

For the thrill seekers, an event like the Wood Chopping Competition was really exciting because it showed the strength, the endurance and the skill of the axe men, while for the food lovers, a yummy cheese toastie was just one of many special foods in this event.

The purpose for thePerth Royal Show 2011 is to give fun for all.Although the entry ticket is quite expensive, A$25 for adult,A$12 for child and pensioner, and A$16 for senior,the Perth Royal Show was always full of visitors. Many people came to this smoke free event for not only once but twice or even three times.

“I really enjoyed the Perth Royal Show. Although I first did not want to go, as it is quite expensive as a student, I don’t regret going there,” said Marieke Reichert, who came to the show twice in a row.

“The best thing is, for me, it offers different activities for all different age groups and that especially the showrooms and animal shows display a really interesting side of Western Australia. I love all the scary sideshow activities and felt that the show had a really good vibe. Simply, I loved everything,” she added.

The free ticket for kids under 12 was another reason that boosted the number of visitors.

Similar to pasarmalam in Indonesia, cotton candy or fairy floss is also an inseparable part of the event. There were also some special event’s foods such as doughnuts, roasted beef roll, toffee apples, dag dogs, sausages, choc banana and of course, chips.Even satay, martabak and beef rendang were also sold in the Perth Royal Show.

In addition to foods, one of the main gimmicks in Perth Royal Show is “showbags” which contains a number of novelties and confectioneries. The “showbag” is a particular bag of commercial merchandise, and a distinctive feature of Australian shows. The bag is usually made from plastic or paper, and is printed with graphics promoting a theme or manufacturer such as Sesame Street, Dora the Explorer or Harry Potter. Most “showbags” are marketed to children, but they were available for adults as well. Even the lifestyle “showbags” such as man and woman magazines, girl accessories and Australian sport club merchandisescould be found in this show. These “showbags” price range from A$ 5toA$150.

Another gimmick was the must see 20 minutes fireworks spectacular show which was held every night in the main showground. Most visitors did not want to miss this show. But, as the Perth Royal Show ran from 9 am to 9 pm, if the visitors wanted to leave the venue and come back at night to enjoy the 3D fireworks spectacular show, the committee provided the disposable bands to wear so they could enter the gate without purchased another ticket.

As a one-for-all event, there were plenty of choices for both young and old, from the Haunted Hotel, Mega Drop, and Python Loop, to Cup and Saucer, Dumbo Rides and Merry Go Round. The tickets to play these games were not included in the entry ticket, but it did not stop the enthusiasm of the visitors to play all the games.

“I rode the Mega Drop and it was really exciting. We dropped from the spot, which was40 meters high in less than two seconds. I felt my heart almost pumped out at that moment, even did not have time to scream, my heart was beating really fast after that when I was back to ground,” said Jia Tang, one of the visitors.

There were also numerous show games such as fishing, shooting, and tossing games. The winner of these games got various prizes such as giant dolls, bulky balls, toys and etc.

In fishing games the player must use a fishing rod to fish out a small plastic duck or other object, while shooting games involve shooting using a rifle, darts, or arrows. Tossing games involve throwing balls into buckets. They seemed easy to play but in fact they were not easy at all.

“I played that games, but all in vain, I did not win anything, but I liked it,” Jia said.

(It was supposed to be published in The Jakarta Post, but the editor said that the issue did not quite fit the targeted readers, so I publish it here. Enjoy! :)) 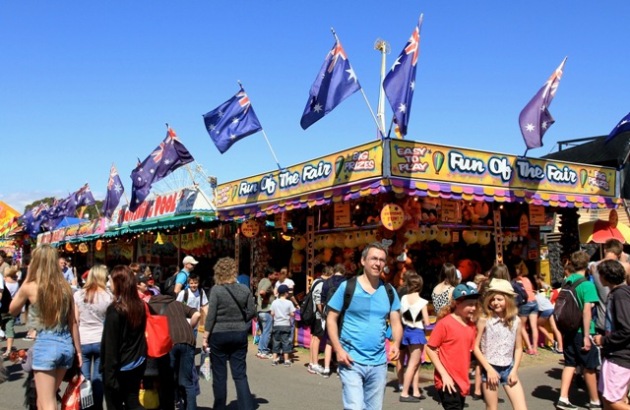 One thought on “The Perth Royal Show: Fun for All, All for Fun”