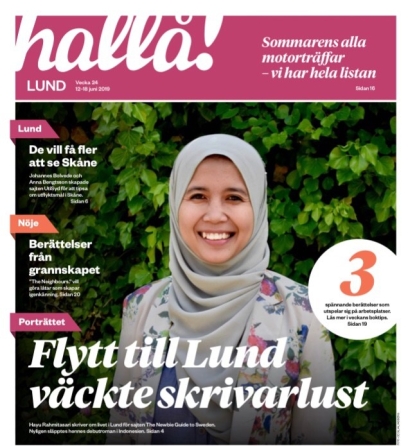 Hayu Rahmitasari writes about life in Lund for a website called The Newbie Guide to Sweden. Recently, she published her first novel in Indonesia.

I always try to see the golden edge.

Hayu Rahmitasari left a good job in Indonesia to start a new life in Lund. The move was  a challenge but at the same time it opened the opportunity to write about life in Sweden and also fiction. Recently, she released her first novel published by an Indonesian publisher.

Hayu Rahmitasari brings with her the youngest daughter Kajsa, six months, in a stroller, when we met at the City Library in Lund.

“She was born here and we wanted to give her a Swedish name – it will be a beautiful memory,” said Hayu and picked up the daughter who curiously looked around.

It has been three years since Hayu came to Sweden together with the oldest daughter, Hayya. Her husband had already been in Lund for eight months to work as doctoral student in media and communication studies and the family could reunited.

“The long distance relationship didn’t work, so I resigned from a good job at the university and came here. At first I thought “why do I do this? ”, but now I think it is part of a larger plan. This has given me the opportunity to achieve my dream of becoming an author. I always try to see the golden edge in life, the positive. Telling stories gives me one inner satisfaction,” said Hayu.

Do: Writes fiction and guides for The Newbie Guide to Sweden. Passionate about Social Media. Active on Instagram under the name @hayuhamemayu.

The goal for Hayu is to find a job here, but the way to get there was a bit longer than she thought. Meanwhile she has instead invested in her writing. She writes regularly for the site “The Newbie Guide to Sweden” that provides information for whoever is new in Sweden. Besides practical tips, Hayu share her reflections on everyday life in Lund.

“All who are new in Sweden have this “Swedish moment”, a moment where you meet something typical Swedish,” she explained  an example of what her articles can be about.

“My “Swedish moment” is when someone dropped something, and then discovered that someone else picked it up from the ground and tied it to one lamppost or the like,” she said. 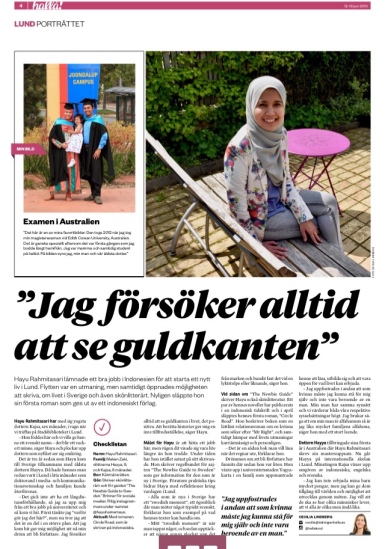 Alongside “The Newbie Guide” Hayu also write fiction. A couple of her short stories have been published in Indonesian magazines and in April, her first novel, “Circle Route” was released . She describes the book as one easy-to-read relationship novel about a woman who is looking for “Mr. Right”, and at the same time struggling with life’s challenges career and personal.

“It is such a book you want to read when it’s raining outside,” she explained.

The dream of becoming a writer has been there since she was little. She grew up in the university town of Yogyakarta in a family that encouraged her to read, train and be open to what life can offer.

“I was raised in the spirit that woman must be able to stand for herself and not be dependent on one man. My husband has the same principle so we respect and value each other highly. I often say that if my husband is the alpha male then I am the  alpha female in the family,” she said with a big smile.

The daughter Hayya spent her first years in Australia where Hayu Rahmitasari wrote his master’s thesis. Now Hayya goes to International School in Lund. The smallest Kajsa grows up surrounded by Indonesian, English and Swedish.

“I can’t offer my children a lot of money, but I can give them access to the world and the opportunity to develop their perspectives through meetings (encounters). I would like them to see how people live differently. That we are all different but still alike.” 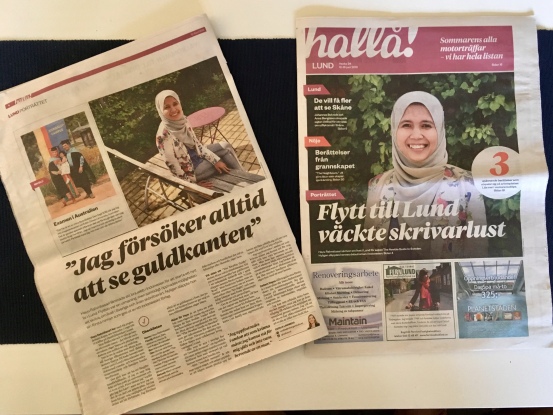 *Based on the article published in Hallå Lund Week 24 (June 12-18, 2019). Original text by Cecilia Lindberg. Translated to English by Hayu Hamemayu.