Never crossed my mind before that I would have to learn a totally new language when I’m already 30+. I mean, I’ve been doing just fine with my English skill. I don’t find any difficulty to communicate here in Sweden as most people speak English fluently. I also mostly work in English environment, so there was no particular need for me to learn Swedish.

But life takes a surprising turn sometimes and I found myself enrolled in Swedish course since early October. Yes, after almost two years of procrastination, reluctance, and denial, I finally have the gut to learn this Scandinavian language.

The course I’m currently taking is called Yrkes-SFI. It’s a Swedish course specifically designed for those who have academic and professional background with higher education from their home country. Apart from this one, Sweden has a regular program called SFI, stands for Svenska för Invandrare or Swedish for Immigrants. The education is free for the student and is paid by the local municipality / Employment Service.

However, for the professional one (Yrkes-SFI), the education is not held by the Kommun (local municipality). Instead, they cooperate with Folkuniversitetet which normally provide paid Swedish courses. But, through the Yrkes-SFI scheme, you don’t need to pay as you’re applying to the local municipality to fund you. So, it’s a scholarship kind of thing. 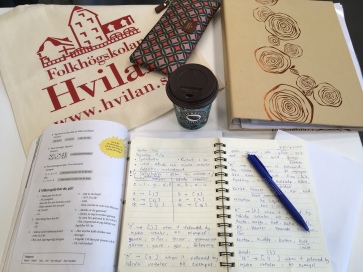 The program itself starts at different levels and both SFI and Swedish as other languages ​​(primary and secondary Swedish) are included in the program. There are different prerequisites for different programs. It is the municipality who decides on whether someone is qualified or not.  Therefore, the application process includes: online application (CV and motivation letter is a must), interview by the municipality, and placement test (to know your level of Swedish).

I don’t know honestly. When a friend of mine told me about the program, I was just thinking “Okay, why not?” “I’ll give it a shoot”, “I got nothing to lose.”

I know, though, unlike languages like French, Mandarin, Arabic or Spanish, Swedish is not a language with many speakers in the world. Only around 10 million people in total. So why do I bother to learn it? Sweden also rank first in terms of English proficiency. Does it really worth?Am I just wasting my time and put extra pressure on myself?

I might not have the exact reason, but I just do what I feel right at this moment. I’d been always wanted to learn new language(s) when I was younger (ahem!) but I never had chance to learn them properly. I was just learning Italian and Hindi from books and movies, for example 😀 . Those were not enough. I needed something more. And now, when the opportunity knocks my door, how can I just let it slip away?

Besides, I think it becomes my “habit”, to enrol in a course when a bun is currently in the oven 😅 . When I was pregnant to Hayya, eight years ago, I was also taking the pre departure program for my master degree. I had to deal with the routine of being student while carrying my big bump here and there. Just like what I do right now.

So, after six weeks and I’m moving to the new course level (yay!), I realise  it’s not worthless at all. I like the feeling of gaining a new skill. I love the feeling of being more aware of what people say around you (no longer sound like buzzing bees to your ear 🙂 ). It feels like you are entering a new perspective, with eyes and ears wider open. It’s a sense of belonging. And it’s far from nothing.

Deep inside I always know, learning a new skill, whatever it is, won’t be useless. After all, education is an asset. It may not give you everything. But it surely won’t leave you with nothing. As Michael Buble says: