One of the most common “needs” in our generation is the urge to always spend the most of the weekend. As if, after five consecutive days of hard work, we all deserved two days full of joy and excitement.

And frankly speaking, I’m not an exception 😅.

Ever since the years when I studied in the university, to the times I worked full time and now freelance, the craving for a fulfilling weekend remains the same. No matter how the weekdays pass by, I consider weekend as a special moment. A moment to have a break from routine and do anything I cannot do from Monday to Friday.

It can be as simple as, having relaxing moment in the morning, not rushing to get things done, Netflix time, dining out, or having a weekend getaway. For me, it doesn’t have to be fancy. The idea is just to make weekend feels special. To recharge ourselves before Monday calls.

This year, as we now live in the outskirt of Lund, we couldn’t explore as much as we want since the bus service doesn’t run on weekend and the train comes every one hour only. However, it doesn’t stop us from having proper weekends. In fact, some of our weekends were totally well spent.

On January 27, for example, we went to Måkläppen, a natural conservatory of seals and migratory birds located in Falsterbo peninsula, south western Sweden. It only opens from November to January as the place is actually a nest for the seals and its appearance changes due wind, high tide, abrasion, beach erosion and so on, so it’s not always accessible for human.

We knew this interesting place from our landlord and it was actually him who had the idea to go there and invited us. To which we happily joined! 😄

We went there early in the morning and drove for roughly an hour. We parked the car in the provided parking spot then walked by the beach for almost two hours to the precise location and of course had a fika in between. 😆

A look out at Måkläppen

The youngest member of the Unsettled Family 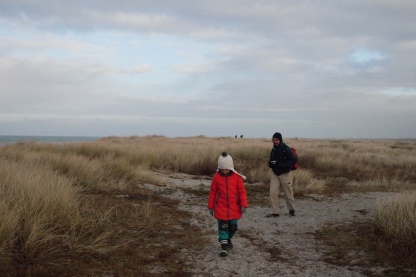 Keeping up with her pace was really something 😀

It was cold and windy and we were walking really slowly as Hayya wanted to stop here and there collecting stones, observing bushes, playing in the beach or simply singing and dancing along the way 😅. The place was bit crowded that day as it was the day before the conservatory is closed for visitors. Everyone wanted to make their last attempt to see a glimpse of seals. Otherwise, they would need to wait until November.

Once we had arrived in the spot, we were completely awed by tens of seals laying on the sand. Some of them were also swimming around. The coldness and tiredness were nothing compare to the feeling of seeing the seals in their natural habitat. It was one of those days to remember.

Another well spent weekend was last Saturday when we went to the nearby hill in Stångby to have a snow sliding. After being “attacked” by the Beast from The East Siberian wind and snow storm last week, Lund has been surprisingly covered with thick snow so it’s a perfect time for snow sliding.

It was a new experience for all of us so we had so much fun. We tried different slopes and even strolled inside the woods. It kinda reminded me of The Ritual movie, a movie about four friends who their hiking in Sweden’s wilderness turned into horror. Lucky us, there was no ghostly deer or something like in the movie (spoiler alert!). Haha. 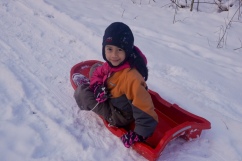 Almost bumped into the tree 😀 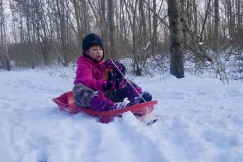 Sometimes I wonder, why do we need to put so much value on weekend? Why Saturday and Sunday should feel different than any other days?

Maybe we’re just a victim of the so called working system. Maybe we’re just a willing prisoner of a global discourse. Or maybe, we’re just the weekenders who desperately need a space to get something out of our system. After all, we need weekend to start all over again, as the proverb says:

A weekend well spent brings a week of content! 😉