5 things Lund and Jogja have in common

Picture is retrieved from https://vacationspotindonesia.wordpress.com/2014/05/26/yogyakarta-a-cultural-heritage/ 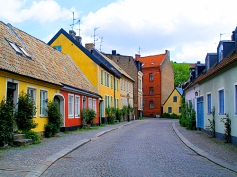 Picture is retrieved from http://kingofwallpapers.com/lund.html

From the moment I arrived in Lund, Sweden, I always feel that this southern Swedish city shares so many similarities with Jogja, my hometown, even though these cities are located at different sides of the world. Jogja and Lund are separated thousand miles away. So, how can I say that the two cities have some things in common? Well, here are the resemblances I found so far:

Both Lund and Jogja are student city where universities play central role of their rhythm. Lund is the home for one of the oldest (and greatest) universities in Sweden: Lund University. Meanwhile, Jogja is famous for its numerous and reputable universities, schools and colleges. The oldest Indonesian state university (Universitas Gadjah Mada) and also the private one (Universitas Islam Indonesia) are both located in Jogja. No wonder these cities are always bustling with students and somehow always related to the universities. In Lund, for example, most residents have correlation with Lund University either as student, employee, alumni, or any other relationship. Even the Swedish singer and presenter Måns Zelmerlöw, who won the Eurovision Song contest in 2015 and was born in Lund, is the son of a Professor at Lund University. Campus life is definitely the thing that can’t be separated from Jogja and Lund. And it influences many things in the cities: the beat, the culture and even the living cost. Just like Jogja which is way cheaper than Jakarta, the living cost in Lund is also lower than Stockholm (though it’s still bit high for my budget 😀 ) 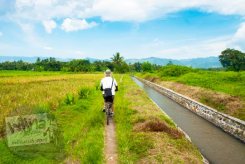 Pictured is retrieved from http://jogja.mblusuk.com/785-Konflik-di-Balik-Susur-Selokan-Van-Der-Wijck.html 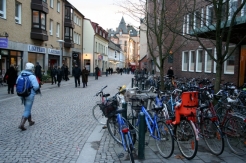 Picture is retrieved from http://www.resilientdesign.org/fundamentals-of-resilient-design-9-building-strong-communities/

Yogyakarta is known as a bike city for quite long, though the number of people who ride bike in Jogja in everyday basis is getting smaller today (compare to tens years ago). Jogja always has this trademark and biking around Jogja now become a touristy leisure people can’t resist. One of the collectively shared memories about Jogja is riding a bike by the rice field in a sunny yet not too humid day and meet friendly people who just love to smile :D. Similar thing can be found in Lund. Bike is a must here. People travel everywhere by bike. The city has connected bicycle lanes, and the bicycle parking lots are always packed. That’s why Lund is claimed as Sweden’s number one bike city.

Historically speaking, Lund and Jogja were once appointed as the capital of Sweden and Indonesia respectively. Between 1716 and 1718, the king of Sweden at that time, Charles XII of Sweden, resided in the city and making Lund the temporary capital during that period. This was following the on and off war between Sweden and Denmark that fought over Lund. Lund was indeed part of Denmark before the Roskilde treaty in 1658 and there were bloody wars and great loss from both countries to defend and/or conquer this city. In Jogja case, this city became the capital of Indonesia during the Indonesian National Revolution from 1945 to 1949 shortly after Indonesia declared its independence from Dutch Colonialism. This happened because Jakarta, the actual capital, fell to the Dutch under its military aggression.

Jogja and Lund are both small cities, in the context of each country of course. I mean Jogja is bigger (and more populous) than Lund, but compare to other cities in Indonesia, Jogja is relatively small. There’s even a joke that everyone in Jogja knows each other so it’s not possible to have an affair in this city 😀 . In Lund, everyone may not know each other but there is a huge chance to meet same person at the same time, in the same place, everyday (happened to me often). What a small city indeed.

Jogja has been humorously reputed as “Slowly Asia” because the beat of the city is indeed slow. In Jogja, there is a slogan “alon-alon waton kelakon” which loosely translated to English as “slowly but sure”. This city isn’t hectic like any other cities in Indonesia. The people don’t like to be in hurry. And if there is a chance to sit back and relax, they will definitely take it before anything else. Same as Jogja, Lund is also bit slow in terms of beats and works. The people love to have fika, or simply a break, as often as possible. They don’t like to rush things either. They work efficiently but they surely know how to relax between works.

So, do you feel what I feel?