Wise men say, “You never appreciate spring until you have been through a tough winter,” and trust me, if you want to experience one of the toughest winters in the world, Sweden is definitely the place. Winter in Sweden can be really harsh indeed. The Scandinavian winter depression is known for a reason. However, when February ends and weeds begin to sprout, you can act like the Stark family in Game of Thrones and say: “spring is coming.” 😆

There is no official date for the first day of spring in Sweden. Instead, SMHI (Svenskt Metrologiskt och Hydrologiskt Institut), who is in charge of Swedish weather and climate, defines the start of spring as seven consecutive days with rising temperatures between 0 and 10 degrees Celsius (source: here). Normally, it occurs during the third week of March or sometimes earlier for Southern Sweden. However, the spring in Sweden can be little bit tricky. Even in April, you can have warm sunshine for a day or two then all of sudden; a strong wind comes with rain, snow and of course minus temperature. Locals call it as April weather. It is when the weather is so unpredictable and changing every 10 minutes 😅.

In southern part of Sweden, Eranthis grows in the end of winter or in the very beginning of spring. Sometimes they even grow at melting snow. Its golden glow giving a hope that spring is just right in the corner.

It is easy to find these honey-scented flowers. They are literally in every step you take 😄. Just look down and you will find them blanket the ground in a carpet of shimmering gold.

This gorgeous blue flower is another early sign of spring. It is one of my favorite flowers here. Mostly grown under the tree and just like Eranthis, it also creates a blanket covering the ground making you want to sit back and lay down. However, they don’t last quite long. Soon their petals fall and the blue flowers will be replaced with green grass.

These flowers are also among the earliest garden flowers to bloom in spring. It is very common to see them in pots in Sweden since they are quite easy to grow.

In public areas in Sweden, these flowers are used for decorations. Though pansies have various colors, the purple one seems to be the most famous one. 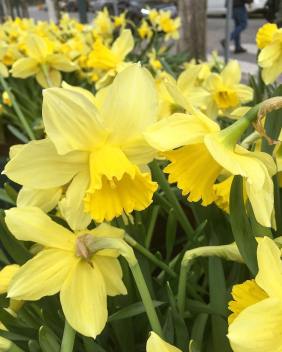 This bright yellow flower is indeed very famous during Easter. That is why it’s called Påskliljor or Easter Lilies in English. It is one of the necessary Easter items in Sweden.

Sunny, yellow daffodils are a wonderful sign that spring has finally arrived. Daffodils belong to the genus Narcissus and have a trumpet-shaped structure set against a star-shaped background. This flower is believe as a symbol of friendship. The earliest known reference to Daffodils can be found in the 6th century A.D. writings of the Prophet Mohammed (source)

Believe as one of the ancient genus, Magnolia is one of the most primitive plants in evolutionary history. Fossil records show that magnolias once existed in Europe, North America and Asia over 100 million years ago. It is named by the Swedish botanist Carl Linneaus in 1737 in honor of the French botanist Pierre Magnol (1638-1715) (source). Its distinctive scent makes the spring really is in the air 🙂 . 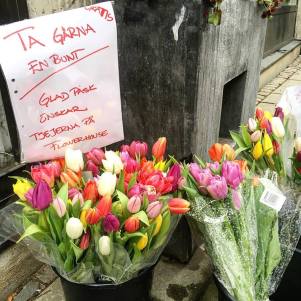 Although tulip is identical with The Netherlands, it is also very famous in Sweden. There is even a Tulip Day tradition here when people buy tulips or giving tulips for others to welcome spring. Swedes also love to decorate their window with tulips. No wonder, a website says that 150 million tulips grown in Sweden each year and there is no country in the world that buy tulips as much as per person as Swedes (source: here).

The most popular and most wanted flowers of all time (or so I think). Famous for its pinky colors, sakura has white color too, which is equally beautiful. Similar to Hanami in Japan, there is also an annual cherry blossom festival takes place in Kungsträdgården, Stockholm, every mid-April. But, cherry blossom is actually easy to find in almost every park in Sweden. You can find the list of the best places to see cherry blossom in Sweden here.

So, which flower in Sweden you love the most?